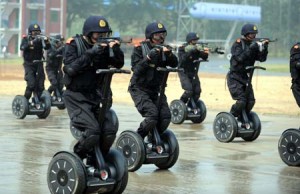 by musashi on Tue Feb 25

It seems that the police justification for carrying firearms is twofold: Crown Immunity and the common law right of self defence.

A police officer is defined as a person who, whatever his rank within a police force, holds the ancient office of constable, ie one who has undertaken to serve the crown as an officer of the peace. His office is, in law, independent. He is not technically a crown servant since the crown neither appoints him nor pays him, nor is he a local authority employee. That’s what my law book says.

A soldier has crown immunity to carry arms because he is employed directly in HM Forces to travel to far off lands, experience exotic cultures, meet interesting people and kill them.

Appointments to a police force, and the direction of its operations, are matters for the chief constable who is himself appointed, subject to the Home Secretary’s approval, by the police authority.

The London forces have a commissioner who, technically, is appointed by the crown and the detailed management of a police force is controlled by the Home Secretary. My law book says that as well.

So, an independent police officer constable is not appointed or paid by the crown but appointed by a chief constable, who is not an independent police officer constable, and who is appointed by a police authority made up of councillors, magistrates and independent members who are ‘not the crown’ and who is paid half by the Home Office and half by the police precept which is taken from us in council tax. See your council tax bill for the breakdown. I said that.

This begins not to sound like someone with “crown immunity” to carry unlicensed firearms, as is claimed in the ACPO PDF I have on the use of firearms in operations. That PDF is available on the net. I won’t even go into banned battlefield weapons such as Raptor ‘incapacitant’ sprays. D&C Police carry and use this spray but not the de-activant which is readily available from the suppliers of the spray. They said that – in an FOIR response.

A crown servant, on the other hand, is defined as any person in the employment of the crown (this does not include police officers or local government employees). So says my law book.

The Bill of Rights, 1688/9, which enshrines our right to self defence, says that we may “carry weapons for our defence as permitted by law.” The aforementioned weapons are not permitted by law. Rusty proved that one when he went to court and then to jail! At the moment that seems to be no more than a penknife with a blade no more than three inches long. My law book says that.

The only mention of the crown, so far, is that these independent police officer constables have “undertaken to serve it”. Does any of this sound like crown immunity to carry firearms?

Anybody want to write in and ask them?

While you’re at it – and if you live in Manchester in particular – you might want to ask about the searches that routinely take place when some independent police officer constables, who are not crown servants and who are appointed by a civilian approved by a politician and working in a private for profit company, stroll about with passive response sniffer doggies nicking people innocently sitting at pavement cafés sipping their grenadine with a little bit of Percy in their pocket. I saw it on the telly so it must be true, real, honest and trustworthy!

I know of no publicly stated authority for doing this. The 1984 PACE Act says they can search just about anybody when they want to, but there must be some cause for reasonable suspicion. When that cause is the result of what must surely be an unlawful search then that cause is what our Yankee brethren call “Fruit of the poisoned tree.” It was not a fair cop, guv.

As these not very cute little fucking sneaks are purpose built for drug searches and have no brief for general policing duties they are, properly speaking, only allowed out in the public on operational exercises – not walkies. If they are out on Op Exes, do the independent police officer constables, who are not crown servants, appointed by a chief constable who is not an independent police officer constable and who was appointed by ‘not the crown’ to a private company subject to approval from a politician, have an open warrant for random search of the general public based on no reasonable suspicion and the general use of a dog trained for specific search tasks on specific operations?
Who gave an open warrant to him? Who signed this get-us-into-jail-free card?

Anybody want to write in and ask?

Walkies among the unsuspecting, post bank-scam boulevardiers on Manchester’s golden pathways is strictly limited to untrained civilian quadrupeds of the not grassing you up and getting you fucked over kind. Taking these little scamps out among the café crowd, who would otherwise have given no rise to reasonable suspicion of terrible drug abuse, then, is conducting random searches is it not?

PACE seemingly gives cops the right to stop and search anybody at any time in a public place but there must be good reason. The dog supplies this, of course, because he came and sat at your feet. Little cunt.

If you have been a victim of this arrogant and insulting fuckery then you might have a claim. A claim under what law? Police misconduct and unlawful searches, of course, but really, who gives a shit. Make it up as you go along – they do. Bastards!